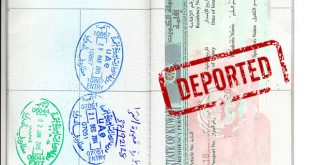 KUWAIT CITY, Oct 9: An Indian expatriate was arrested at Kuwait International Airport for attempting to enter the country illegally as he was deported from Kuwait 20 years ago. Sensing his nervousness, officials at the airport checked his details and discovered that he was banned from entering Kuwait. He was referred to the concerned authorities for further investigations. Meanwhile, an Arab expatriate, who arrived at Kuwait International Airport from an Asian country, was arrested for attempting to smuggle traditional wrist watches of a known brand, after declaring them at a value that is one-quarter of the actual value.

Woman blackmailed: A Kuwaiti citizen was arrested for blackmailing a Bedoun woman by threatening to spread her personal photographs on social media if she did not pay him KD 3,000, reports Al-Anba daily. The woman told police that the suspect, whom she knows, took a group of photographs of her. However, she was later surprised when he started demanding KD 3,000. He threatened to publish the photographs on social media if she did not give him the money. The Prosecution issued an arrest warrant after the woman lodged the complaint. After the suspect was arrested, he confessed to the blackmailing charges. He was referred to the concerned authorities for necessary legal action.

Couple doing drugs: Two Kuwaiti citizens — a man and a woman — were arrested for consuming drugs behind a building in Mahboula area, reports Al-Nahar daily. While on a routine patrol, Ahmadi securitymen suspected a vehicle that was parked behind a building and decided to check. They found the man and woman taking drugs. After a thorough search of the vehicle, securitymen found a sachet of “Chemical” drug and drug paraphernalia. The suspects were arrested and referred to the Drugs Control General Department for necessary legal action.