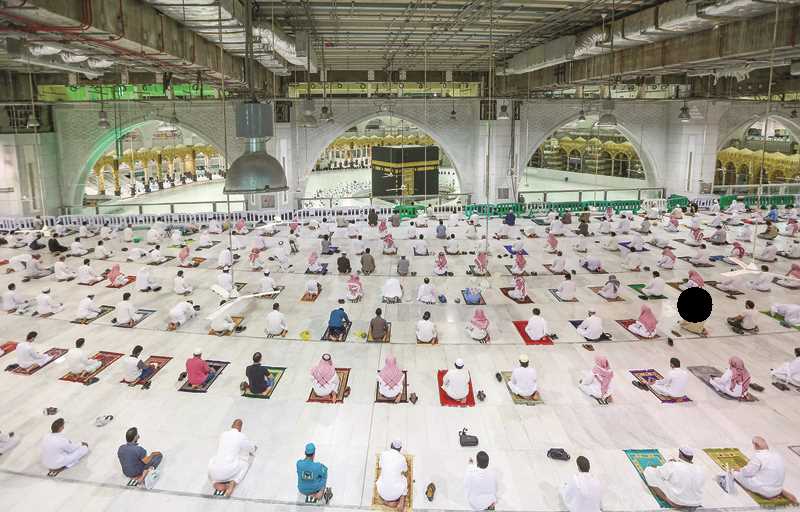 MAKKAH: Saudi Arabia opened yesterday Islam’s holiest site for prayers for the first time in seven months, and expanded the umrah pilgrimage to accommodate 15,000 worshippers as it relaxed coronavirus curbs. Mask-clad Saudi citizens and residents of the kingdom were allowed to pray inside the Grand Mosque in the holy city of Makkah, amid what authorities called extensive health precautions.

“Citizens and residents have performed salat Al-Fajr (dawn prayers) at the Grand Mosque today as (authorities) start implementing the second phase of the gradual resumption of umrah,” the official Saudi Press Agency reported.

Earlier this month, Saudi Arabia allowed up to 6,000 citizens and residents per day to perform the umrah – a Muslim pilgrimage that can be undertaken at any time – after it was suspended in March due to the coronavirus pandemic. Under the second stage that began yesterday, the number of umrah pilgrims was increased to 15,000 per day. A maximum of 40,000 people – including umrah pilgrims – will now be allowed to perform daily prayers at the mosque.

Under a third stage, set for Nov 1, visitors from abroad will be permitted. The limit on umrah pilgrims will then be raised to 20,000, with a total of 60,000 worshippers allowed. A raft of precautions have been adopted, according to state media. The revered Black Stone in the Kaaba – which is customary but not mandatory to touch during the pilgrimage – will be out of reach.

The Grand Mosque is to be sterilized before and after each group of worshippers. Thermal sensors have been installed to measure the body temperature of pilgrims, Makkah authorities said. The umrah usually attracts millions of Muslims from across the globe each year. Authorities said the umrah will be allowed to return to full capacity once the threat of the pandemic has abated.

Saudi Arabia hosted the annual hajj pilgrimage in late July, on the smallest scale in modern history. Only up to 10,000 Muslim residents of the country were allowed to take part, a far cry from the 2.5 million who participated last year. Saudi Arabia has recorded more than 342,000 cases of COVID-19 and 5,185 deaths since the pandemic began. – AFP