One year on, grief and anger over Iran protest crackdown 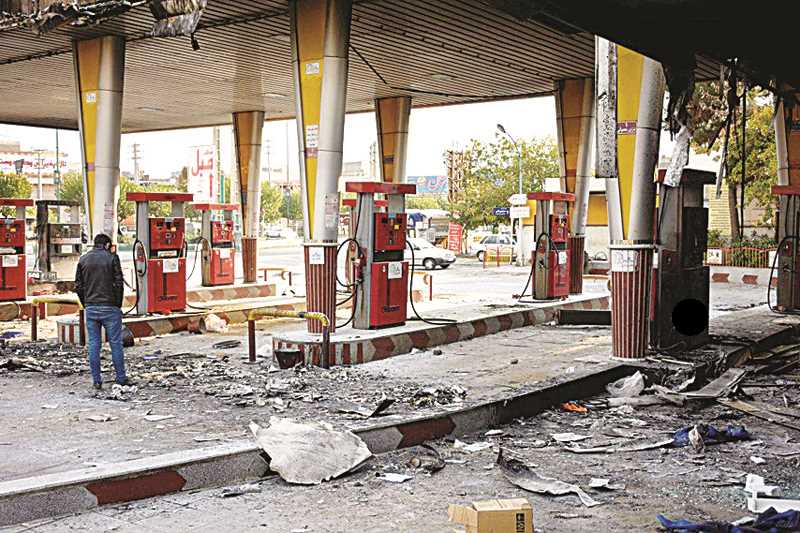 PARIS: One year after protests that were harshly suppressed by the Iranian authorities, grief over the hundreds of mainly young lives lost is matched by anger over the lack of accountability for a crackdown whose-scale is only now beginning to emerge. The protests, of a magnitude rarely seen in Iran following the 1979 Islamic Revolution and the biggest since 2009 rallies over a disputed election, erupted nationwide in November 2019 after a sudden hike in fuel prices.

Activists say the authorities managed to impose control only after a ruthless crackdown that, according to Amnesty International, left at least 304 people dead in a deliberate policy to shoot at demonstrators. The harshness of the crackdown and size of the toll were concealed by an internet shutdown that activists denounced as a bid to prevent information from filtering out.

Meanwhile, not a single official in Iran has faced justice over the repression, amid allegations that families who lost loved ones have been pressured into keeping silent. Those arrested during the protests, however, have faced sentences including the death penalty. “Iranian authorities have avoided any measure of accountability and continue to harass the families of those killed during the protest,” said Tara Sepehri Far, Iran researcher at Human Rights Watch.

‘Unlawful and excessive force’
According to a report published by Amnesty this week, Iran implemented “a near-total internet blackout” from November 16, the day after the protests began, by ordering internet service providers to shut down, with access restored only gradually from November 21. It said the shutdown prevented people from seeing shocking videos of the crackdown taken by Iranian citizens with their phones, in what the group describes as a “web of impunity.”

Even now the scale of the suppression is still unclear, and Amnesty warns the toll is likely to exceed its figure of 304 verified deaths. The group had posted online what it says are more than 100 verified videos taken in 31 cities in November 2019 revealing the “repeated use of firearms” against unarmed protesters and bystanders.

At least 23 of those killed were under the age of 18, Amnesty said, including teenagers like 15-year-old Mohammad Dastankhah, who was shot by security forces stationed on a roof while on his way home from school in Sadra, a city in the Shiraz region. Another innocent bystander to die, it said, was Azar Mirzapour, 49, a nurse and mother of four who according to Amnesty was shot dead in Karaj, outside Tehran, as she was about to arrive home from work.

“The Iranian security forces used unlawful and excessive force against unarmed protesters and bystanders,” said Raha Bahreini, Iran researcher for Amnesty International. “In most cases security forces used live ammunition aimed at the head or bodies, indicating they were implementing a shoot-to-kill policy,” she added.

‘Held accountable’
Activists say that rather than helping relatives of the victims seek justice, authorities have been prosecuting protesters, with Amnesty alleging that those arrested were subjected to torture, including water-boarding and sexual abuse. Death sentences imposed in June against three young men were halted only after a campaign to spare their lives both outside and inside Iran.

Manouchehr Bakhtiari, whose 27-year-old son Pouya was shot dead, was jailed after he criticized the authorities, according to Persian-language media based outside Iran. The refusal of Iran to prosecute any officials-and the lack of response to calls for a UN-led international inquiry-has prompted activists to set up their own “tribunal” to determine whether crimes were committed under international law.

The Aban Tribunal, named after the Iranian month when the events took place, is being set up by NGOs including the London-based Justice for Iran and the Oslo-based Iran Human Rights (IHR). Rights lawyers and other tribunal members will hear evidence from witnesses and victims from February 10-12, 2021, in The Hague, and judgments will be announced in April 2021.

The tribunal will send a “strong message to those responsible for the atrocities that they are being watched and one day will be held accountable for the crimes they’ve committed,” said Mahmood Amiri-Moghaddam, executive director of Iran Human Rights. – AFP